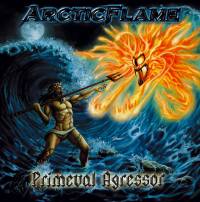 ARCTIC FLAME is a great new 80ties Epic-Metal band influenced by Metal-heroes like MANILLA ROAD, JAG PANZER or JUDAS PRIEST. The band was formed in 2001 by guitarists Rod Mariani and Don Dioro and by drummer Mike Paradine (ex-Balistik Kick) with the idea of starting a traditional Metal-Act in the vein of Iron Maiden and Judas Priest.

After a year spent mostly in rehearsal studios, writing, practicing and honing the material, ARCTIC FLAME finally found in Dave Lowe an excellent vocalist. All along the band had tried in vain to secure the bass slot. Bassists came and went, as they proved to be either incompetent, irresponsible or both. In September 2003, the band finally found in John Spear the right bass player and was finally ready to start playing out.

The band´s first gig was as opening act for the legendary hard rock band THIN LIZZY. The show went over well with an appreciative crowd response and even members of the Thin Lizzy band and crew complimenting the band on a fine first performance.
The band went on to play many shows over the next several months including opening slots for Michael Schenker, Helloween and Yngwie Malmsteen.. But in April 2004 John Spear decided to leave the band to pursue other interests.

Long Beach Island, New Jersey resident Jeff Scott joins and begins his work with the band adding a new spark to the band. Jeff’s energetic stage performance and solid bass playing quickly becomes a fan favorite. The energy level of their live shows went up an extra level as noted as they were the support band at the W.A.S.P. show in Sayreville, NJ.
ARCTIC FLAME has operned for the following bands: Thin Lizzy, Michael Schenker, Yngwie Malmsteen/George Lynch, Helloween, W.A.S.P., Overkill, Motorhead, Krokus, Stryper and others.
After having released a 5-Track-Demo in 2005, ARCTIC FLAME now finally recorded their debut album „Primeval Aggressor“, which was produced by Jack Frost (Seven Witches). The album contains 8 killer tracks that every fan of 80ties Epic-Metal will definitely love.